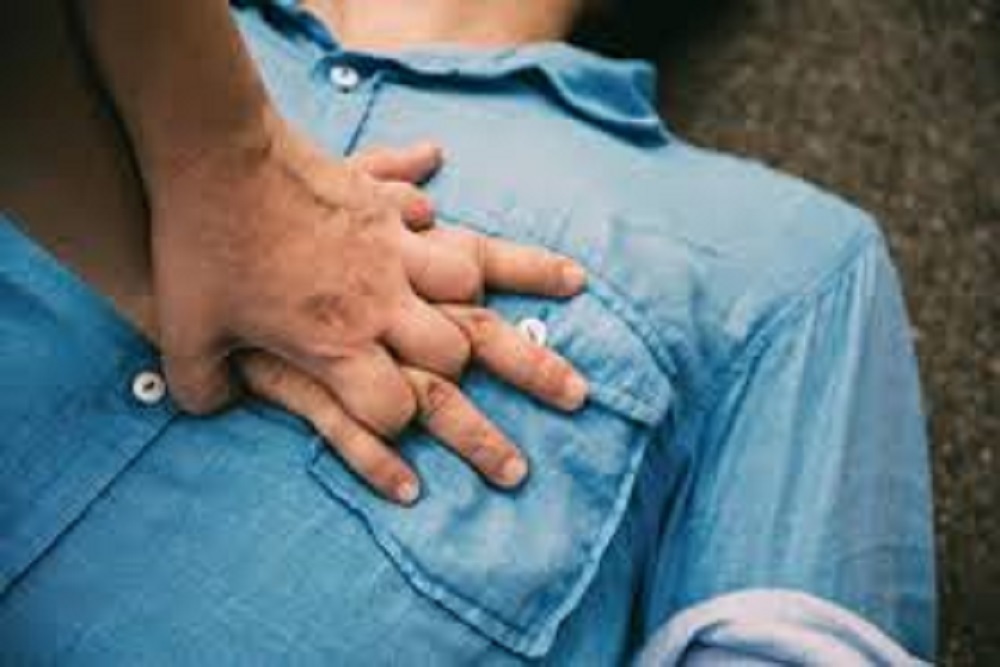 Al, 67, was riding a stationary bike at the Gus & Flora Kerasotes YMCA that morning when he suddenly slumped over. “We were talking to each other normally, and next thing I knew, he was gasping for air,” Lynn said.

She caught him as he began to fall from the bike and yelled for help. Gina Pecori, a trainer at the YMCA, helped her lower Al to the floor and then immediately brought over an automated external defibrillator (AED). At the same time, Matt Dougherty, who was lifting weights nearby, saw the crisis unfold and hurried to help.

Matt—a registered nurse in the Cath Lab at Memorial Medical Center—knew immediately from Al’s gasping breaths and colorless face that he needed CPR. He suspected at first that he was suffering a heart attack. But doctors would later determine that Al had in fact experienced a stroke caused by a blood clot in his brain.

Although Matt was very familiar with those lifesaving skills, he was used to performing them in a hospital setting—not on the floor of a gym with an audience of anxious bystanders.

“It was kind of scary to be out of my element,” he said. “My heart was beating so fast that when I checked for his pulse it was hard to tell if I was hearing his heart racing or mine.”

But then, she saw Al gasp and the color return to his face. An ambulance arrived shortly afterward and took him to Memorial Medical Center, where tests revealed the clot in his brain. A dose of tPA, the “clotbusting” drug, was administered to dissolve the clot.

It’s essential that stroke patients get care quickly to reduce the risk of long-term deficits due to tissue damage in the brain. Thanks to the life-saving actions of Matt and Gina, as well as the quick treatment he received at MMC, Al suffered no consequences beyond a cracked rib and some soreness from the CPR.

Al and Lynn didn’t realize Matt worked at the hospital until he stopped by the ICU for a visit.

“He came to the room and I thanked him,” Al said. “I said, ‘If my grandchildren were here in this room, they’d be thanking you as well.’”

By Christmas Eve, Al was home – and a few days later, he and Lynn took off as scheduled to spend the winter in Florida. They plan to enroll in a CPR training course soon, and hope they can use their story to inspire others to receive that training as well.

Matt said that CPR is an essential skill when every second counts. Cardiac arrest or stroke can occur suddenly, without warning, even in healthy, active people like Al. And when it happens, a quick response from trained bystanders can make the difference in the minutes before first-responders arrive.

“You never know when or where it’s going to happen,” he said.

Al knows he’s lucky that his medical crisis occurred in a place where an AED was available and people were on hand to help.

“Because I was there at the Y, Matt was there, and Gina was there,” Al said. “Otherwise, the outcome could’ve been much different.”

Matt is also grateful that Al made a full recovery. They’ve been exchanging texts, and plan to meet up again in person when the Riddleys return from Florida.

“Everybody [at the YMCA] was a big help,” he said. “It was kind of amazing to see how everyone came together that day.” Want to get notified whenever we write about Abraham Lincoln Memorial Hospital ?

Sign-up Next time we write about Abraham Lincoln Memorial Hospital, we'll email you a link to the story. You may edit your settings or unsubscribe at any time.