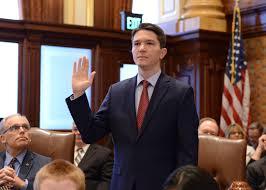 Illinois state Sen. Steve McClure (R-Springfield) has had enough of all the state’s runaway property taxes.

“Over the last few months, people have gotten their property tax assessments and a lot of them have found their property is suddenly worth a lot more than it was a few years ago despite no improvements being made to it,” McClure told the West Central Reporter. “I don’t think it’s any coincidence that those are the assessments used to set property taxes.”

McClure has filed Senate Bill 3694 as his answer to the issue. The bill would establish that home values used for property taxes cannot increase more than the rate of inflation.

“By saying you can’t increase home values like that for a person that has no construction done on the property we’re trying to help protect people who are already paying too much in taxes,” McClure added. “It’s time to rein in property taxes because it’s getting to the point more and more people can’t afford them.”

McClure said all the taxes are taking a toll in other ways as well.

"We know that constantly increasing property taxes are crushing family budgets and pushing people out of Illinois,” he said in a post to his website. "This bill is an attempt to finally get a handle on the situation and provide families with some real relief."

McClure also envisions the legislation as a stopgap to the state’s growing issue of outmigration.

“This legislation would ensure that changes in assessed property values would reflect the actual changes in value due to inflation, so that property tax bills shouldn’t be increasing any more than the wages of the people that pay them,” he added. “This is a realistic, common-sense plan that we can implement right now to help put a stop to sky-rocketing assessments and tax bills.”

Want to get notified whenever we write about Illinois State Senator Steve McClure ?

Sign-up Next time we write about Illinois State Senator Steve McClure, we'll email you a link to the story. You may edit your settings or unsubscribe at any time.